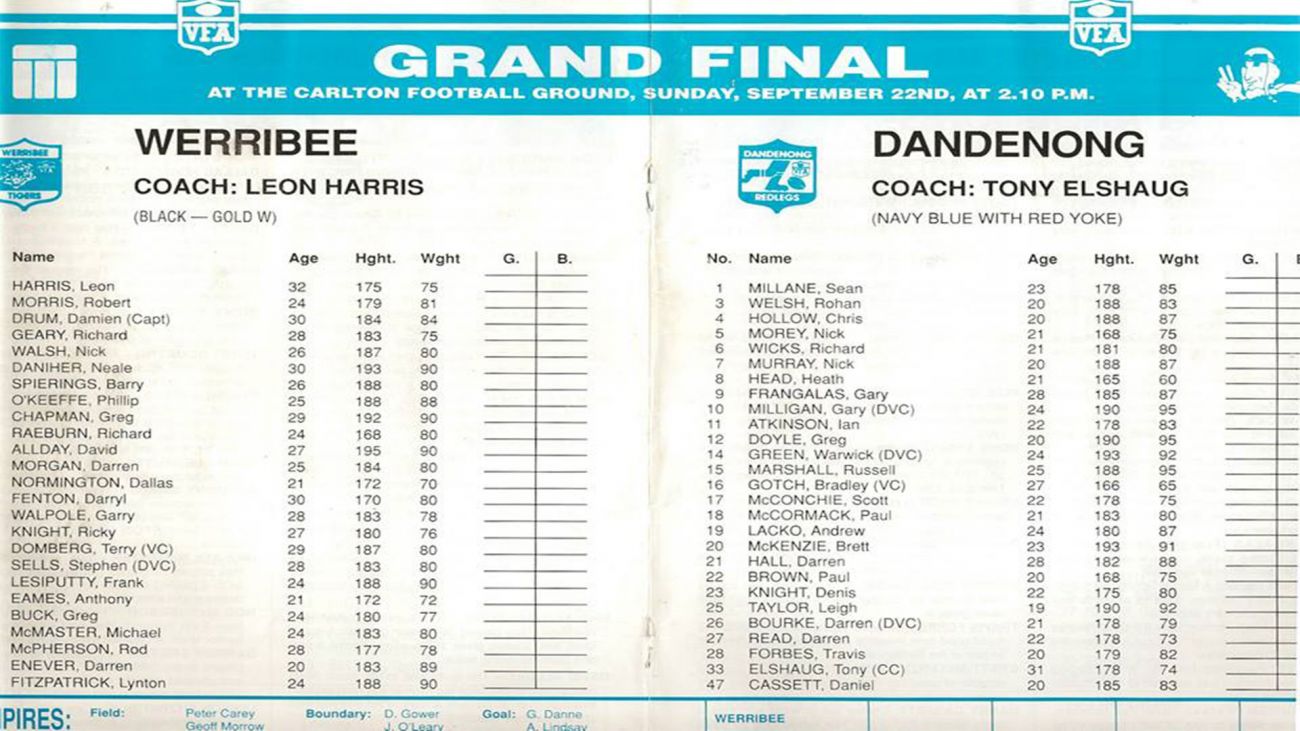 Reflections on our first Grand Final, 30 years on.

Ian Wilson takes us back to the days when Mork, Drummy, Putty and Willo ruled the roost at Chirnside Park. It's 30 years since our first grand final appearance. The Big W Podcast starring Drummy and Mork is coming soon.

For those new to the club, I thought it would be nice to head down memory lane to a time before our current boutique stadium and the sanitised existence our modern day players have today.

The changerooms at Chirnside Park were approx. 5m long x 3m wide with bench seats running around the perimeter. Old tin lockers sat behind them with doors that never quite shut properly and there were six open showers but three of them were always in the dark because the lights didn’t work. This spelt danger for any new players because serial pests like Frank Lesiputty and Cameron Wright were always on the hunt for hijinks "prey". A bucket of cold water or worse still, a trickle of warm liquid could suddenly appear on a leg and traumatise an unsuspecting team mate.

Around the corner was the ablutions area which consisted of a urinal that catered for three players and one traditional toilet which had to survive three games on a Sunday. The odour emanating from that area could take the scab off a cold sore from ten paces!

Down a short corridor was an extinct sauna that was so disgusting it needed a Hazchem sign. At the end of the corridor, adjacent to the property room, was a small space which former player Damian Drum did his best to convert into a gym. A few years later Donald McDonald turned it into a small auditorium for the player/coach meetings and the old visitors rooms were converted into a gym.

Like most grounds, Chirnside Park had a cricket pitch which in May became a mud pit, but not as bad as grounds like Shepley Oval Dandenong or North Port whose mud stretched throughout the entire 50m square like chocolate ice cream. What made these grounds dangerous was when the mud dried in August creating concrete with sharp, uneven edges.

There was no science involved in training back then. We were conditioned to run out four quarters, only coming off when injured or dragged. The players of today are amazing athletes conditioned to run at a maximum speed for shorter bursts. Subsequently, recovery is very important but it was non-existent back then. A Monday night was always a 5km run with some stretches and skills work.

I don’t like hearing comparisons between the eras in terms of fitness because the respective demands and needs of the teams of then and now are completely different. I have an old school friend in WA, Simon Beaumont who is a veteran broadcaster with Radio 6PR. Simon ran a few Ironman triathlons including a top 10 placing in Hawaii. He told me that everything came down to specific conditioning for your sport and that there was no way he could play even half a game of VFA footy. He could, however, easily get on a bike and ride 200km. The same applies to the way our young blokes train today versus the “more is better” philosophy of days gone by. We were built for endurance, not explosive pace.

When Leon Harris arrived to coach the club in 1990 we were only in our second year of VFA First Division with the old Second Division being disbanded at the end of 1988. In 1989 we had a relatively uneventful year under former Geelong champion Michael Turner and Leon’s brief when he arrived was to accelerate the learnings and hardness of the team to withstand the rigours of playing the best opposition in Division 1.

Leon played in the first two years of his three year stint. He had played 200 games with Fitzroy, represented the Big V and won the Players Association Most Courageous Award. All that at 5ft 7inches tall and that’s being generous! His nickname Mork came from his likeness to the late great comedian, Robin Williams and the 70s TV Show, Mork & Mindy.

Mork wore shin pads, something I’d only ever seen ruckmen wear, but it was soon obvious as to why. He was a lunatic on the field and thrived on body contact. His usual smile changed dramatically as soon as he crossed the white line either at training or games. He set high standards around the “one percenters” and never compromised when it came to having your head over the ball and hurting opponents when they had the ball … fairly, of course. One of Mork’s tips that we took on board was to knee any opponent who shepherded you in the thigh, thus rendering them “corked” and out of the game.

The game in those days was very much “man on man” with very few stoppages as a result. Zoning was called “loose” and you knew who your opponent was before you arrived at the game. The only time we had vision was when we recorded a Saturday match of the day on the ABC, so it invited a lot of “off the ball” incidents. After most tackles you were guaranteed a “clip over the ear” for your troubles which would often escalate to a brawl. Leon’s brutal training regime prepared us well for what was to come on the weekend.

We never trained in groups (backs/mids/forwards), only ever as a team. Full ground, man on man sessions that regularly stretched to 2 ½ hours on a Wednesday were common and God help us if we were flogged on a weekend because he had some punishments for after training that tested the Geneva Convention!

Mork spent his AFL career under David Parkin and Robert Walls, two hard taskmasters but also educators. We received firm feedback and like Parkin, Mork would write letters and reports and was always well prepared and extremely dedicated. After an improved 1990 and making the finals for the first time, the foundations and expectations were set. It was time for the competition to take Werribee seriously.

The 1991 Grand Final team was very strong mainly due to the experience of the players who had played at the highest level:

Added to that, there was experienced VFA players such as “Inspector Gadget” Greg Chapman, “The Mechanical Device” Ritchie Raeburn and a speedy back pocket from the defunct Brunswick FC Anthony Eames’ who a week prior had become Werribee’s first Liston Trophy winner.

The game itself see-sawed with the Tigers getting out to a 30 point lead in the third quarter before Dandenong drew back to reduce the margin to 5 points at three quarter time. The last quarter was tense and in the balance before Phil O’Keefe made a split second, regrettable decision which caused a long delay and meant Phil was sent off for the remainder of the game. The younger Dandenong legs came home a bit stronger to win by 9 points with a few of them going on to be drafted (Welsh, McCormack, McKenzie, Hollow, Knight & Bourke).

Once you’ve coached a losing grand final it’s difficult to let it go. Despite all the great memories you may have looking back over a career, why is it that a losing grand final can sit in the back of your cerebellum like an itch that can’t be scratched? I know it hurt Mork terribly and the players of course.

Despite scraping into the 1992 finals with an exhilarating win against eventual premiers Sandringham in the last round, sadly Mork wasn’t re-contracted. The club wanted a playing coach and Mork’s body was wrecked. His able assistant Damian Drum wasn’t considered for the same reason and he moved to Port Melbourne to begin an excellent coaching career. Donald McDonald took over and did a superb job, not just winning a flag but navigating through tough financial times and a possible merger.

Through the initiative of Leon, his former Assistant Bernie Sheehy and ex-players Michael McMaster and Darryl Fenton, there have been lunches held at Bernie’s pub in North Melbourne over the past five years or so. Anyone from the Mork era is welcome and they are hilarious catch ups. They have taken on even more meaning given Neale’s fight with MND and the lunches have provided a great opportunity for him to reflect on a year at Werribee that he truly loved.

These guys put the club on the VFA map in terms of respect and competitiveness. Within two years of never playing in the VFA First Division we played finals, within three years we were grand finalists and within five years Premiers. So much of the credit needs to go to Leon Harris and I can’t help but feel a part of that 1993 Premiership Cup belongs to him.

Thanks to Mork, Drummy, Turtle (Greg Welsh) and the administration for all their hard work over that formative period. We wouldn’t be the club we are now without your commitment.