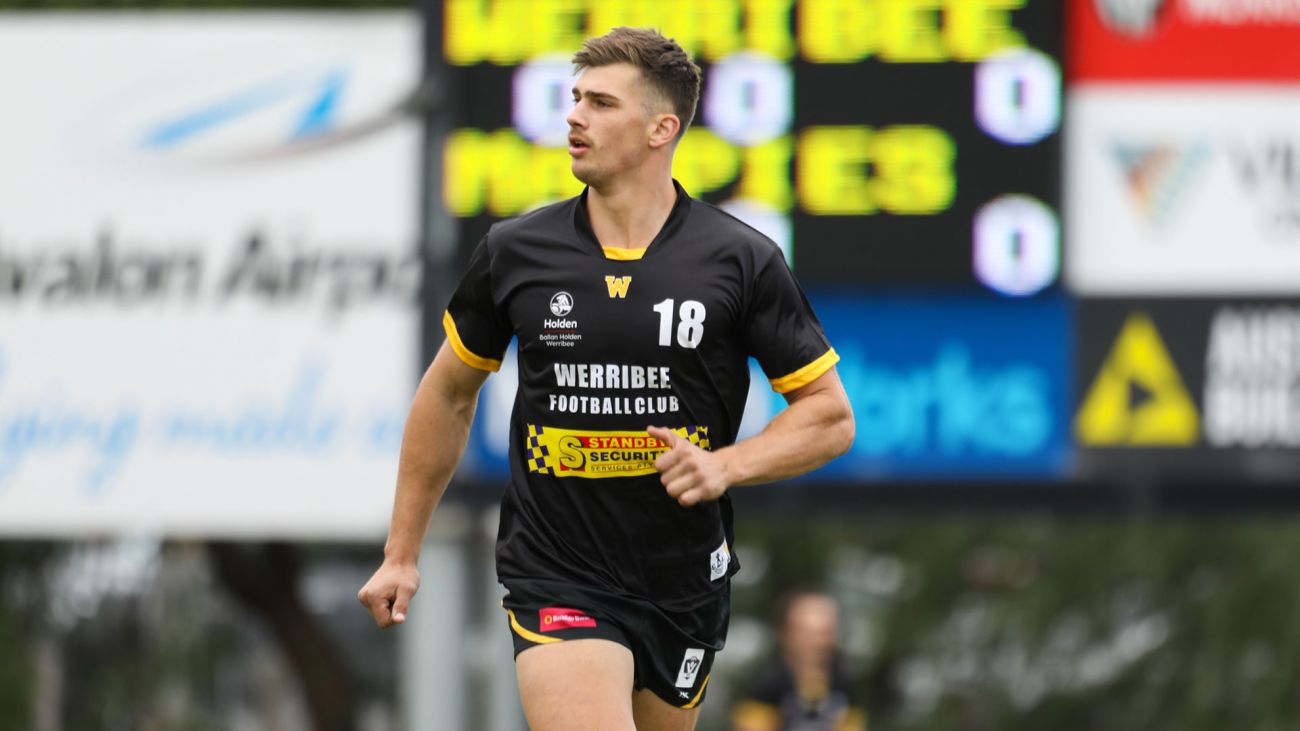 Most days Nathan Cooper can be found scaling some of Melbourne’s biggest buildings, on weekends he’s a key part of one of the best defensive units in the VFL.

Hanging from skyscrapers cleaning windows is a job he started in Sydney in 2016 while studying civil engineering and project management. In fact, he was several stories up the very first time he and coach Michael Barlow spoke.

At that moment Barlow knew little about Cooper who had been recruited by Choco Williams. And he probably wasn’t the only one, Cooper a New South Welshman, grew up playing rugby and initially lined up as a forward when he switched codes as a teenager.

But it’s as a defender that Cooper has come into his own, and if people didn’t know much about him a few months ago, they likely do now after his performances through rounds 1-6.

Cooper is in his first season at Werribee and first at VFL level after 2020 was lost to COVID.

It’s been a winding road back to state league football for the 23-year-old who grew up in Sydney and played four seasons in the NEAFL, the first two with the Swans Reserves having come through their academy, before spending a further two years with Sydney University.

There was also a season playing in country Victoria for Wangaratta Rovers in the Ovens and Murray league under former Swan Darryn Cresswell, which was the catalyst for a move to Melbourne a year and a half ago.

Cooper initially signed with Richmond VFL, but when last season was cancelled without a match being played, he cut ties with the Tigers and made his way to Avalon Airport Oval.

The switch came at the recommendation of former Werribee players Ryan Hebron who was a teammate of Cooper in Sydney and Alex Marklew who he played with in Wangaratta.

After the first month and a half of the season Cooper could be considered Werribee’s recruit of the year, earning high praise from coach Mick Barlow.

“Nathan is a player that’s come to our club for more consistent VFL opportunities which he’s gained through a really good preseason,” Barlow said.  He was here when I arrived but what Choco (Williams) saw in him was a hard-nosed key defender that could add to what we already had with (Nick) Coughlan and (Max) Spencer.

“Accountability to role is a real strength of his and competing one-one-one where he is able to win or half contests and follow up at ground level where he’s very agile and nimble.  He is rarely beaten which we saw across the preseason and then into our first few games.”

To date Cooper has lined-up on the opposition’s most dangerous forward each week and is a big reason why Werribee is only conceding a messily 50.5 points per game.

He was brilliant matching up on taller opponents in Collingwood’s Mason Cox and Richmond’s Callum Coleman-Jones in rounds one and three and just as good on Williamstown’s Nick Rodda in round two.

Cooper featured in Werribee’s best players in the each of the first three games before putting in more strong showings at Box Hill and against the Northern Bullants.  He said his early form has come on the back of a big preseason.

“I felt I had a really strong preseason, I put on 7kgs from mid-January to about round one and got my body right which has helped in my role locking down the big forwards,” he said.  I’m a lot more mature playing state footy this time round and just more physically prepared for it.

“It has also helped coming into an environment at the club where the backs have really gelled from the first practice match.  I’ve been really comfortable in the back six, we’ve been able to play some pretty good footy down there and even from round one to now, that connection has been really good.”

At 195cm and 95kg Cooper’s physique is comparable to key defenders at AFL level.

“He’s aspirational and wants to go to the next level and he’s identified what he’s got to do to help get there,” Barlow said.  He’s got to be capable of playing on a guy like Tom Hawkins, or as he has shown for us, the taller skinny guys that have a bit more reach.

“Against those guys he can use his physicality in the contest to mask that height deficiency that he’ll sometimes have.  With ball in hand he’s improved a bucket load, we don’t want him to be something he’s not with the ball, but at the moment he makes really good and sound decisions.”

With 11 games left in the home and away season Cooper plans to continue to be Werribee’s rock on the last line, doing his job without any real fuss, just like he does outside of footy.

“I’m just trying to really enjoy my footy, play my role for the team each week and hopefully win a flag at the end of it,” he said.