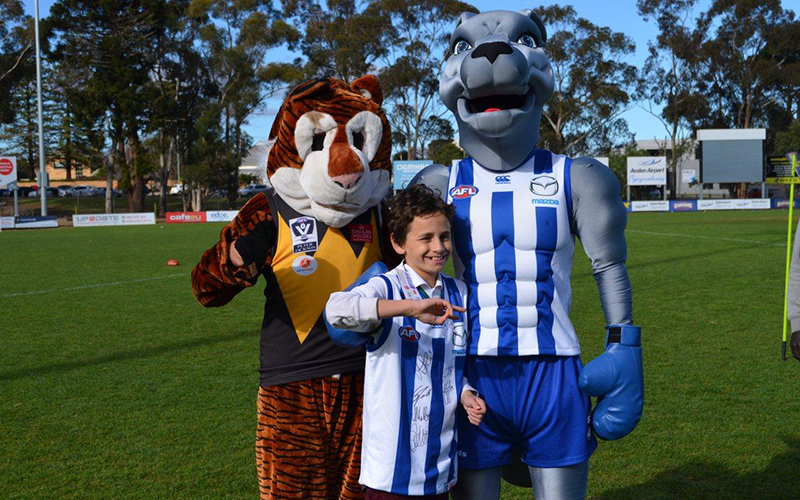 The competition involved 4 boys and 4 girls teams from schools that participate in the ‘Huddle in Schools Program. This is a 4 to 6 week football program for grades 3 and 4, and delivered to 20 schools in Wyndham by coaches from the Werribee and North Melbourne Football Clubs.

The day kicked off with a group warm up with Werribee Football Clubs Multicultural Development Officer, Majok Ngong. Then the 8 teams played each other in an AFL9’s round robin tournament. At midday, the fastest boy and girl runners from each team lined up to compete in the half time sprint. The winner to take home a signed North Melbourne Football Club jumper. Following the sprint it was time for the semi finals which saw Baden Powell Derrimut Campus and Good News Lutheran progress to the grand final for the boys, and Wyndham Park and Baden Powell Derrimut make it through for the girls.

In a tightly contested boys final, Good News Lutheran came away with the win. While Baden Powell Derrimut girls team continued its unbeaten run, taking out the girls final.

Mayor of Wyndham, Cr Peter Maynard presented the medals to the winning teams along with Werribee Football Club Football jumpers to the players awarded best on ground.

Werribee’s Multicultural Development Officer Majok Ngong said ‘It’s great to see students new to the game enjoying themselves. Some of them kicked their first football only 6 weeks ago. I think this tournament is a great way to introduce kids to Australian Rules football. The ‘Huddle in Schools Program” will continue throughout terms 3 and 4 and we hope the Wyndham Cup will grow every year”

A message from the Senior Coach.

2021 update from the President

Love the Game, Not the Odds