Neither Brenton Rees nor Josh Porter finished among the coaches’ votes for Werribee in its stunning seven-point upset victory over the Box Hill Hawks, but the efforts of both provided some insight into the ability of their side to finally break through after a tough month of football.

Too often throughout his side’s lead-in run of four consecutive losses, senior coach John Lamont had lamented that too much had been left to too few, but he had no such problem at City Oval on Saturday.

That Rees and Porter – men who only weeks ago faced uncertainties over their place in the Werribee lineup – were able to stand up and deliver the two pivotal moments that twice turned the game in their team’s favour perhaps best exemplified that.

Rees had already forced an important early turnover and set up an Andrew Hooper goal when the visitors found themselves trailing by 14 points midway through the second quarter.

Moments earlier, Box Hill forward Will Murphy had bagged his third goal with a quick snap over his head, and Werribee, having traded blows with the Hawks through a free-scoring first term, looked on the verge of letting another game slip away.

Enter Rees. With a desperate bit of intercept work tight in the forward pocket, the midfielder gathered and snapped a brilliant goal that helped turn the game on its head.

By half time, Werribee had the last five goals and led by 16 points, the instigator for it all a man who just a fortnight earlier may well have been wondering when his next chance to don the “big W” would come, having been forced out of the side two games into the season.

Porter, too, had missed some weeks, albeit with a foot complaint; but with the key forward already in need of some time to readjust to the rigours of VFL football following his 2017 sabbatical, it seemed a setback he could ill afford.

Saturday’s performance went a long way to allaying those concerns. Having earlier played a key hand in an important Jake Sharp goal with a sliding mark inside forward 50, Porter had already produced his most significant game of the year when he ran down Hawthorn-listed defender Conor Glass in the goalface in the dying moments of the third quarter.

To that point, the Hawks had snatched back both the momentum and the lead with a run of five straight goals of their own. But Porter’s subsequent free kick after the siren for his first goal since 2016 again turned things Werribee’s way, the visitors holding their hosts goalless in the last while managing two of their own to produce one final lead change and secure a rousing victory.

Speaking after the game, Lamont stressed the importance of strong individual efforts throughout his side in producing the boilover against the fifth-placed Hawks, themselves desperate for a win after having their promising start derailed by two losses in three weeks.

“We just had a really good, even contribution,” Lamont said. “Our tackling and pressure was at the level we need it to be at.

“Even saving for Box Hill gaining a bit of momentum at times, overall, we’re really pleased with the pressure.

“It’s a terrific win against a good team who are on the rebound at their home ground.”

Right across the board, players stood up to be counted for Werribee.

Pushed forward from the wing, Sharp was a revelation in front of goal. He finished with three to top his side’s scoring tally, but his forward defensive pressure and ability to create contests proved equally important, maximising Werribee’s scoring opportunities and keeping it in the hunt early despite the Hawks’ forward entry ascendancy.

Hooper’s early goal set his tone for the day, resulting in his most important performance in weeks. Down back, Nick Coughlan was outstanding with his intercept work, producing his best game in Werribee colours.

Even the bit players had big bits to play. After a quiet start, Ethan Petterwood emerged as a key ball-winner in the middle of the ground through the second-quarter blitz. Harry Boyd brought himself into the game with some useful relief ruck work across the second half, ultimately winning a crucial free kick deep in the forward pocket that helped Werribee snatch back the lead for the final time.

Of course, the usual suspects again stood tall, in some cases quite literally.

In his return to City Oval, former Hawk Sam Collins provided Box Hill with a cruel reminder of the defensive talent it once had at its disposal. Time and time again he thwarted his old side’s attacking push on the last line of defence to finish with six of his 11 marks contested.

At the other end, Josh Corbett – although down on scoring output – was equally imposing with six contested marks of his own, while Jack Berry again fought tirelessly in the ruck against another AFL-listed big man, on this occasion Marc Pittonet.

With 31 disposals, Tom Gribble was at his prolific ball-winning best. He and Kurt Aylett – the latter crucial in curbing the influence of Hawks captain Andrew Moore – helped Werribee get on top of the clearances early and win the final count 47-30, quashing any doubts over its ability to win the contested ball in the absence of the injured Matt Hanson.

Ben Moloney and the returning Dom Brew – the latter a welcome inclusion in the midfield setup – lent their support to the clearance cause, and Moloney showed some extra attacking flair with two snaps goals from stoppages; but the pair did best what they usually do best, forming a powerful defensive combination in the middle with 11 tackles apiece.

At the forefront of it all was captain Michael Sodomaco, who led by example as perhaps Werribee’s best player. The skipper has been a standout in his move to the midfield this year but shone even brighter in his return to a more familiar defensive role, combining beautifully with the likes of Dane McFarlane and Ryley Barrack to give his side an extra injection of defensive pressure and run off half-back.

But it was a strong support cast rather than star power alone that proved the difference for Werribee on this occasion. Now with an elusive second win under its belt, it will be looking for a similar ensemble performance when it returns home to take on reigning premier Port Melbourne on Saturday. 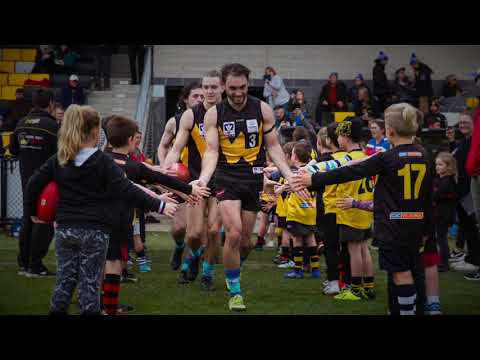